What actually is granite and marble? Coulon Stone explains… 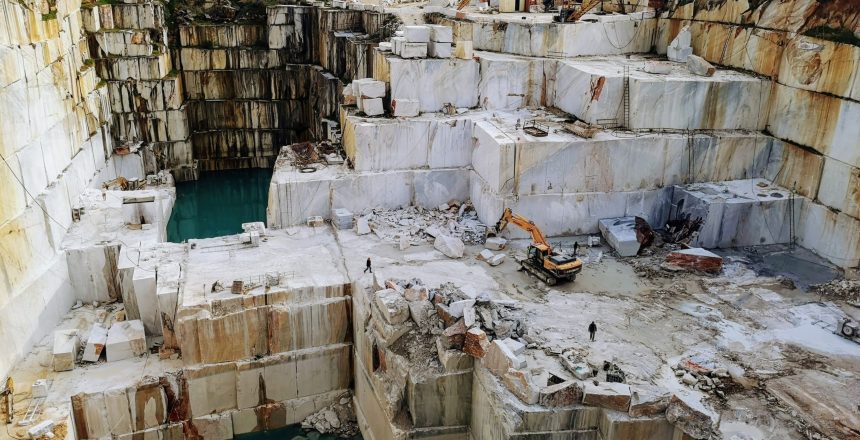 Each month we share ideas for the ways natural stones can be used to enhance your home. We know that they are durable, easy to clean and look after, and they look beautiful. But what actually are these stones, where do they come from and how do they end up in our homes? We explore a little bit about two of the most popular stones used in homes and businesses around the world; granite and marble.

Granite is an igneous rock, a type of rock formed when magma slowly solidifies and crystallises below the Earth’s surface. When we look at granite we can see large crystallised grains. Granite is predominately composed of quartz and feldspar, but other minerals including mica and amphiboles are present as well, and it’s this mixture of minerals that gives each piece of granite it’s unique colour. Many are black, grey, white, pink and gold.

It is the most common igneous rock on Earth and therefore we’re likely to encounter it in everyday life, as paving stones, cladding for buildings, curbing, staircases, gravestones, and of course kitchen worktops. Granite is found all over the world but India and Brazil are two of the biggest exporters of granite. India has such an abundance they only quarry 3% of the granite that they have. It’s found close to the surface so quarries are shallow, and are predominately quarrying granite that’s above ground. Small holes are drilled into the granite and a small explosive separates it from the surface. Once cut in to blocks and then slabs, it’s shipped all over the world to stone stockists. From there it’s bought by local stone masons who cut and finish the stone for their customers.

Marble is a metamorphic rock formed when limestone (a sedimentary rock) is subjected to heat and pressure – metamorphism. It’s composed of many minerals, primarily calcite, as well as clay minerals, micas, quartz, iron oxides and graphite. Under the conditions of metamorphism, a mineral called calcite, found in limestone, recrystallizes to form a rock with interlocking crystals, you can see this when you look at a piece of cut marble.

Marble is typically much lighter in colour than granite. When formed with a limestone which has very few impurities in it, it will be white. Marble formed with more impurities such as clay minerals or iron oxides can be grey, pink, or black in colour. Traditionally Europe has been the largest exporter of marble, particularly Italy, where Carrara Marble is from, Greece and Spain, but more and more marble is coming from the Middle East and China. It’s quarried in a similar way to granite using a small explosion to separate it from the bedrock. It’s then cut in to slabs or blocks, and shipped around the world.

Join us on Social Media for Natural Stone inspiration 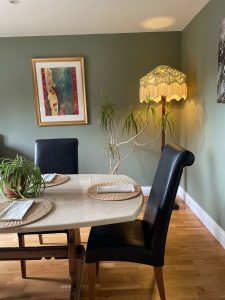 Natural stone around the home… By Coulon Stone

Natural stones like granite, marble and limestone are materials typically saved for bathrooms, kitchens and 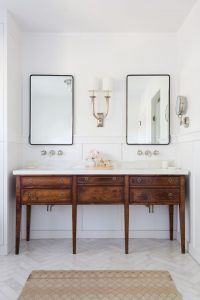 Create a retreat, no matter the size of your bathroom.

No matter the size of your bathroom, you deserve a retreat, a space to wash 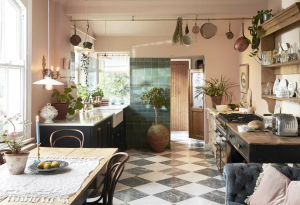 New Looks For The New Year

The New Year can make us itchy for a home refresh. As we’ve found a

If you have any queries, please contact us and we will be happy to help.

**𝐉𝐔𝐋𝐘 𝐈𝐒𝐒𝐔𝐄 𝐎𝐔𝐓 𝐍𝐎𝐖**Hello Readers,Welcome to the 𝐉𝐔𝐋𝐘 issue of Look Local Magazine. Did you know its 𝗡𝗮𝘁𝗶𝗼𝗻𝗮𝗹 𝗕𝗕𝗤 𝗪𝗲𝗲𝗸 from 4th July, so there’s no time like the present to fire up the old smoky joe and chuck on some delicious summer grub. Not that us Brits need an excuse to dine alfresco as soon as the sun shines! For those of you who haven’t joined the 8.8 million Brits set to go meat-free this year (up 22% YOY)*, turn to page 8 for a 𝗦𝗣𝗘𝗖𝗜𝗔𝗟 𝗗𝗜𝗦𝗖𝗢𝗨𝗡𝗧 off your first order at 𝗪𝗮𝘁𝗲𝗿𝗽𝗲𝗿𝗿𝘆 𝗙𝗮𝗿𝗺 𝗦𝗵𝗼𝗽. They sell a huge variety of homegrown meats from their family farm in the Oxfordshire countryside as well as eggs, pies and eco-refill whole-foods. For those who have opted for a vegan or vegetarian diet or have BBQ guests who are and are struggling for ideas on what to cook, turn to page 9 for a delicious meat-free burger option from plant-based food brand Gourmet Garden. They have created a vast selection of vegan burgers, fillet pieces, mince and sausages and their website contains loads of recipe inspiration, so check them out.It is also time for us to get out and enjoy some foot-stomping, heart-pounding, head-bobbing, local music as festival season is well and truly upon us! 𝗦𝗮𝘁𝘂𝗿𝗱𝗮𝘆 𝟵𝘁𝗵 𝗝𝘂𝗹𝘆 sees the return of 𝗧𝗵𝗮𝗺𝗲 𝗧𝗼𝘄𝗻 𝗠𝘂𝘀𝗶𝗰 𝗙𝗲𝘀𝘁𝗶𝘃𝗮𝗹, with venues across the town and a main stage next to the town hall promising to come alive with a wonderful array of live music. The much-loved and much-missed, 𝗧𝗼𝘄𝗲𝗿𝘀𝗲𝘆 𝗙𝗲𝘀𝘁𝗶𝘃𝗮𝗹 returns in August after a 2 year hiatus (due to covid) in the new location of Claydon Country Estate in Buckinghamshire. It is set to be bigger and better than ever offering a genuine community of music, creativity, friendship, and fun. Turn to our Sound of Music feature on pages 14/15 for more information on both of these festivals.And whilst on the subject of the arts and entertainment, we have another 𝗰𝗼𝗺𝗽𝗲𝘁𝗶𝘁𝗶𝗼𝗻 for you! Courtesy of the 𝗧𝗵𝗮𝗺𝗲 𝗣𝗹𝗮𝘆𝗲𝗿𝘀 𝗧𝗵𝗲𝗮𝘁𝗿𝗲, we have a 𝗙𝗮𝗺𝗶𝗹𝘆 𝗧𝗶𝗰𝗸𝗲𝘁 𝘁𝗼 𝗴𝗶𝘃𝗲𝗮𝘄𝗮𝘆 to one of their fantastic shows. 𝗧𝘂𝗿𝗻 𝘁𝗼 𝗽𝗮𝗴𝗲 𝟭𝟳 𝘁𝗼 𝗲𝗻𝘁𝗲𝗿. As always, please continue to shop and support local when requiring any services or looking for places to visit, and if you are a local business looking to promote your services do get in touch and/or follow us on Social Media - I am always happy to share your news online. Love Emma xFor Advertising contact 07707 386034 orEmail: info@look-localmagazine.co.uk Online Version can be read here: https://issuu.com/looklocalmagazineoxonedition/docs/july22_issue116_32pg_final... #localmagazine #looklocalmagazine #whatsoninoxfordshire #communitymag #thame #advertiselocal #supportlocal #supportlocalbusiness #oxfordshiremagazine #smallbusinessesinoxfordshire ... See MoreSee Less

Florence Nightingale Hospice Charity are seeking temporary volunteers to help in their shops across Buckinghamshire over the busy summer holiday period. “With summer fast approaching, we are on the ...

You are not alone…… Florence Nightingale Hospice Charity run a Grief Support Cafe every Friday in Aylesbury ❤️The news of Dame Deborah James' death may trigger difficult emotions for many.The Bereavement Listening Service is open to anyone registered with a Buckinghamshire Healthcare NHS Trust GP and is there to support those adjusting to a life-limiting diagnosis or bereavement.As well as private sessions with trained volunteer Bereavement Listeners, the team is pleased to confirm the return of the regular monthly Support Cafe, which is open to hospice staff, patients and their families, as well as any Buckinghamshire residents who have been bereaved.The Cafe runs monthly sessions at the Hospice in Aylesbury and is looking to run additional sessions in Hazelmere and Buckingham very soon.Please contact Ann Kenny on 07333 304905 or Shane Turvey on 07966 138584 for more information & book your place. ... See MoreSee Less

Now that’s what I’m talking about…!Who else could do with this in their life? ... See MoreSee Less

When this happens, it's usually because the owner only shared it with a small group of people or changed who can see it, or it's been deleted.

This website uses cookies to improve your experience while you navigate through the website. Out of these cookies, the cookies that are categorized as necessary are stored on your browser as they are essential for the working of basic functionalities of the website. We also use third-party cookies that help us analyze and understand how you use this website. These cookies will be stored in your browser only with your consent. You also have the option to opt-out of these cookies. But opting out of some of these cookies may have an effect on your browsing experience.
Necessary Always Enabled
Necessary cookies are absolutely essential for the website to function properly. This category only includes cookies that ensures basic functionalities and security features of the website. These cookies do not store any personal information.
Non-necessary
Any cookies that may not be particularly necessary for the website to function and is used specifically to collect user personal data via analytics, ads, other embedded contents are termed as non-necessary cookies. It is mandatory to procure user consent prior to running these cookies on your website.
SAVE & ACCEPT