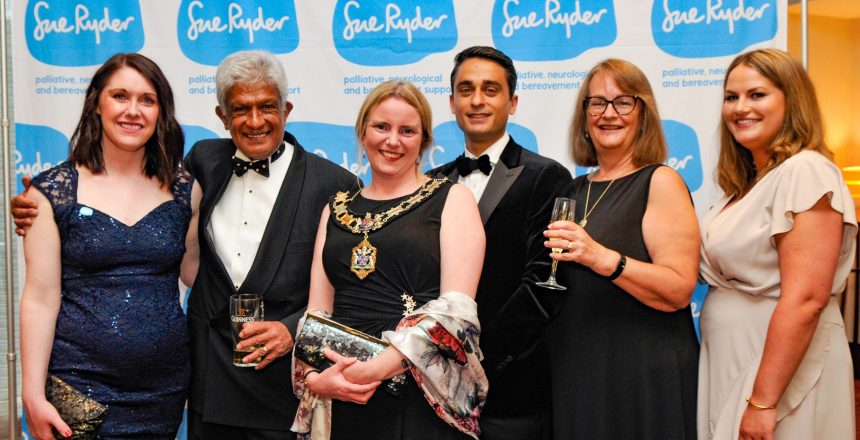 “I was born in Reading, and I know all about the great work that Sue Ryder do in the Thames Valley area and all over the UK. The very special auction pledges may well go to support your loved ones at the time when they need it most. Thank you, Sue Ryder, for everything you do.”

As well as the exciting auction, guests enjoyed an evening of glitz and glamour, hosted by local comedian Adger Brown, with a sparkling drinks reception sponsored by Laithwaites, gourmet three course meal and live music and dancing from the Vodka Martinis.

The Mayor of Reading, Cllr Rachel Eden, who selected Sue Ryder Duchess of Kent Hospice as one of her mayoral charities, awarded raffle prizes to lucky winners on the night too.

Following such generous support on the night, Sue Ryder is delighted to announce the event has raised an incredible £40,000, which will go towards funding Sue Ryder’s bereavement services in Berkshire and South Oxfordshire.

Local supporter Sue Webb delivered an emotional speech on the night about the vital support she received from Sue Ryder when her husband, John, who had dementia, was receiving palliative care.

“I never realised dementia was going to be as bad as it was. I thought I could handle a bit of forgetfulness but without Sue Ryder I just don’t know what I would have done, I really don’t. It was their kindness but also the change in John while they were here and when they had been here. He would smile and it made him happy to see them.

“The most glorious thing that happened was that Sue Ryder sent a counsellor, Ken, to speak to John and he was just an angel. I still can’t believe that these angels are just going round taking care of people. They made so much difference to me and to my family as I’m sure they have to many of you. And we’re here tonight to make sure Sue Ryder can continue to be there when it matters for many years to come.”

“I would like to personally thank everyone who supported the Sue Ryder Thames Valley Summer Ball. It was a fantastic night. Thanks to everyone’s hard work and generosity we managed to raise £40,000. This will truly have a massive impact in ensuring that the local community can have access to Sue Ryder’s palliative and bereavement services which are vital in supporting families grieving from the loss of a loved one. Thank you all so much.”

“Our Summer Ball was a fabulous evening from start to finish and we’d like to say a special thank you to Chris Tarrant for his message of support, our Headline Sponsor Gravity Personnel, our Creative Sponsor A.B.Walker and to all of the businesses and individuals who came along and made it such a huge success.

“Every penny raised from the event will go towards helping local people get the vital bereavement support they need at what has and continues to be a really challenging time. The support from the local community for this event has been inspiring and I am truly grateful to everyone who has contributed. I would like to say a special thank you to our Sue Ryder Community Ambassador, Sue Roberts, who went above and beyond to make the event possible.” 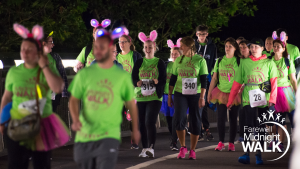 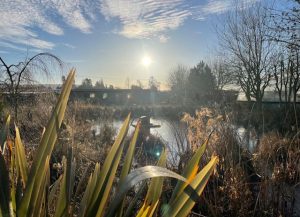 Lindengate – Better Health & Wellbeing for All, Through Nature Would you like to get

If you have any queries, please contact us and we will be happy to help.

Welcome to the August issue of Look Local Magazine. Schools out for Summer! And what a lovely summer we’re experiencing especially now that someone has turned the thermostat on the sun down, just ever so slightly.There’s so much going on locally over the next six weeks from festivals to food and drink events. I’m particularly excited about a 𝐑𝐮𝐦 (my new favourite tipple) 𝐓𝐚𝐬𝐭𝐢𝐧𝐠 𝐍𝐢𝐠𝐡𝐭 which is taking place at The Lamb Chalgrove (who have recently reopened under new management) in partnership with Chalgrove Artisan Distillery. They also host a number of other regular events now as well as one off themed nights, see their advert on page 28 for more details.The 𝐀𝐮𝐠𝐮𝐬𝐭 𝐁𝐚𝐧𝐤 𝐇𝐨𝐥𝐢𝐝𝐚𝐲 weekend sees the return of Towersey Festival in its new location of Claydon House near Buckingham and a little closer to home in Chinnor is the long established 𝐅𝐥𝐨𝐰𝐞𝐫 & 𝐏𝐫𝐨𝐝𝐮𝐜𝐞 𝐒𝐡𝐨𝐰. Taking place on Whites Field from 1.30pm this show gives local amateur enthusiasts the chance to shine. There is something for everyone from entering your own fruit and veg, home baked goods, crafts, flowers, photography, children’s classes to local stalls and refreshments from the Wee Book Shop. Visit www.chinnorflowerandproduceshow.co.ukThis issue also includes not one but three competitions to 𝐖𝐈𝐍 𝐓𝐈𝐂𝐊𝐄𝐓𝐒 to local events. So if you’re a fan of the arts, check out our The Players Theatre, Thame give-away on page 17. For the foodie you have a chance to get your hands on a pair of tickets to this years Thame Food Festival where you’ll be able to peruse a huge array of mouthwatering artisan food and drink producers as well as watch cookery demos from some famous faces in the cooking & baking industry. Or for the aviation fanatic turn to page 13 for your chance to win tickets to the Abingdon Air & Country Show.And if you’re a 𝒍𝒐𝒄𝒂𝒍 𝒃𝒖𝒔𝒊𝒏𝒆𝒔𝒔 𝒍𝒐𝒐𝒌𝒊𝒏𝒈 𝒕𝒐 𝒊𝒏𝒄𝒓𝒆𝒂𝒔𝒆 𝒚𝒐𝒖𝒓 𝒎𝒂𝒓𝒌𝒆𝒕𝒊𝒏𝒈 𝒓𝒆𝒂𝒄𝒉 please do get in touch to be included within my 𝐓𝐄𝐍 𝐘𝐄𝐀𝐑 𝐀𝐧𝐧𝐢𝐯𝐞𝐫𝐬𝐚𝐫𝐲 𝐄𝐝𝐢𝐭𝐢𝐨𝐧 (Sept 22). I have a loyal team of distributors who deliver door to door every month as well as a great presence on social media. You can also download a digital version of the magazine from my website and I’m always happy to feature local news here, free of charge. Have a great summer,Love Emma xRead online here: https://issuu.com/looklocalmagazineoxonedition/docs/aug22_issue117_32pg_web ... See MoreSee Less

When this happens, it's usually because the owner only shared it with a small group of people or changed who can see it, or it's been deleted.
View on Facebook
· Share

This website uses cookies to improve your experience while you navigate through the website. Out of these cookies, the cookies that are categorized as necessary are stored on your browser as they are essential for the working of basic functionalities of the website. We also use third-party cookies that help us analyze and understand how you use this website. These cookies will be stored in your browser only with your consent. You also have the option to opt-out of these cookies. But opting out of some of these cookies may have an effect on your browsing experience.
Necessary Always Enabled
Necessary cookies are absolutely essential for the website to function properly. This category only includes cookies that ensures basic functionalities and security features of the website. These cookies do not store any personal information.
Non-necessary
Any cookies that may not be particularly necessary for the website to function and is used specifically to collect user personal data via analytics, ads, other embedded contents are termed as non-necessary cookies. It is mandatory to procure user consent prior to running these cookies on your website.
SAVE & ACCEPT